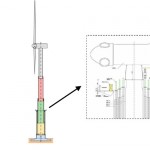 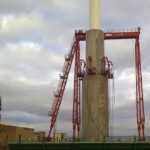 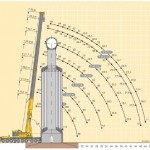 A couple of months ago I’ve been invited by Esteyco to the erection of a prototype auto lifting precast wind tower.

Although I was unable to attend due to other meetings I want to describe shortly their invention, which looks interesting.

Basically, the idea is to create a tower that can “lift itself” without the use of a main crane.

The first step is the assembly all the pieces of a precast concrete tower at ground level (such as an onion, or a matryoshka doll).

Assembly is done from the inside out, with the most internal section being the top one holding the nacelle.

When assembly is completed lifting can begin – starting from the center (the top tower section with nacelle and blades) and moving toward the exterior.

The tower “self-lift” itself using heavy lift strand jacks. These are commercially available equipment, currently used in several industries such as heavy construction or offshore.

The strand jacks will be positioned on an auxiliary platform at the first level.

This solution save you the main crane: only a smaller, 350t to 500t crane will be needed to assembly all the components.

To give you an order of magnitude, to reach 120 m you will need 4 concrete levels that in fold position will have a height of approximately 40 meters.

The expected time for assembly and lifting of all components would be around 3 days.

As an added bonus, due to the increased weight of the tower (acting as a stabilizing load) the WTG foundation would be somehow smaller compared to a steel tower of the same height.