Every month I have the opportunity to read several geotechnical survey made for wind farms all around the world.

There are enormous differences between countries, not only in the formal presentation but also in the type of tests used, that often depends on tradition and historical reasons.

For instance reading a geotechnical study made in Peru I discovered the Peck’s Cone (“Cono de Peck”): it is a variation of the standard SPT, introduced in the ’70 in the country.

The most used correlation is:

Nspt = SPT value (number of blows for a 30 cm penetration)

It is used instead of the SPT because it is quicker and cheaper: there is no need to extract the point and store the soil, as the perforating cone is closed. Actually it uses the same machine of the SPT, but is more similar to a DPSH test (but among the other differences, the cone of the DPSH has a 90º angle while the Peck’s Cone has a 60º angle).

On the downside, it has several problems: it is a “blind” test, because you don’t know the materials you are perforating, and there are many available proposed correlations (in addition to Nspt=0,5 c I have found Nspt=1 c and others).

I haven’t been able to find an international standard for this test, so I wouldn’t recommend it.
You can read more about the test (in Spanish) in this study. 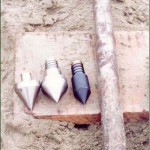 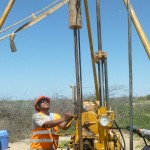 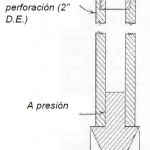 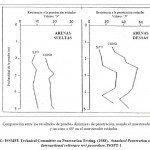