A wind farm earthing system is designed for two different functions: to protect human beings and the components in case of power systems fault, and to protect them in case of a lightning hitting the structure.

Wind turbines have a considerably high possibility of being struck by a lightning during their lifetime. For this reason it is essential to give to the electrical current a low impedance path.

The main characteristics of an earthing system are:

The main factors to be considered designing a normal earthing system are soil resistivity, level of lightning protection required and power system earth fault level. In the case of wind turbines the earthing system is designed to be independent from the soil condition.

In modern wind farms all the WTGs are interconnected with a copper cable buried directly in the ground. It is called a multi-earthed system, and it reduces step voltage to a tolerable level in order to protect living beings from injuries.

Equipotentialisation of turbines and surrounding soil by means of a meshed earthing system reduces step voltage to a tolerable level in order to protect living beings from injury. This is obtained by connecting the entire interconnected foundation earthing (all the steel reinforcement bars in the foundation) to the earth interconnection wires between the wind turbines.

Basically the copper cable coming from the nearest turbine through the trench is tied to the reinforcement bars of the foundation. It goes all around the lower and upper reinforcement, and than is bond to the same earthing bar of all the electrical components of the WTG, such as the MV transformer and the switchgears.

Using this solution the soil conditions around the wind turbines and the resistance to remote earth of the earthing system are not a concern because all fault currents are handled by direct connections of known dimensions and lengths. 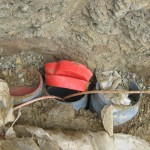 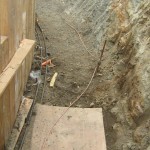 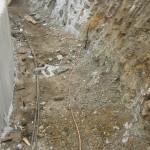 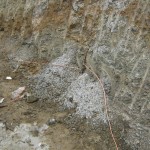 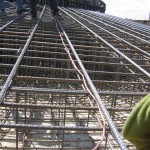