Working in Vestas at dozen of wind farms worldwide I’ve had the opportunity to use frequently AutoTURN to simulate bends and other complicated maneuvers (for instance in towns or near existing structures) with special transports (mainly wind blades and tower section trailers).

Although it is not cheap (the price was almost 1800 € plus VAT: a lot of money, considering that it’s an AutoCAD plug in) I am satisfied with the software.

The main advantage is that you can check very quickly if you’re going to have a problem somewhere, even if you don’t have a topography (sometimes we work with a blurry Google Earth picture). It is very easy to use and intuitive at the beginning, and it includes the rear wheels remote control used nowadays.

Main drawbacks: there are only a few special vehicles for wind components transport in the library, so you have to make your own. I’ve replicated several Nooteboom trailers, as we often works with them, using the “personalized vehicle” feature.

Moreover it is not possible to simulate reverse gear. This is a big, big problem as several times we use it in real word situations. Workaround: I’ve modified a normal trailer (not a wind blade tow), and I use it when I desperately need reverse gear.

Third problem, many times it would be useful to simulate problems in 3D, as sometimes the tow get stuck somewhere in a vertical transition. There is an upgraded version who allows you to works in 3 dimensions, but it doesn’t include the vehicles we use in the wind industry, so it’s not useful. The only solution is to build a 3D model of the terrain as I explain in another post and see what happen below the truck. Unfortunately it takes many hours. 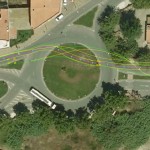 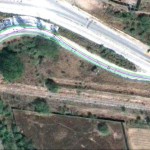