Floating roads are a solution developed in Scotland during the construction of several Km of internal wind farms roads on very poor, organic materials such as peat.

It is an interesting constructive technology, developed on a very compressible, decayed material normally considered as the worst possible subgrade for road construction. In a normal highway project, peat would be removed

Usually floating roads are stabilised haul roads with one or two layers of geogrid. This approach leads to several advantages:

The suggested approach to floating roads construction is based on six steps:

Among the design assumptions, it’s relevant to remark that a rut with a depth up to 10 cm is to be expected.

The first step is an in depth site investigation, where several parameters are recorded: peat depth and classification, side slope angle, hydrology and permeability. Many in situ test are available, from probing and sampling to more sophisticated techniques such as ball penetrometer or Mexecone penetrometer and ground penetrating radar. After, in laboratory, water and organic content can be defined, together with vane testing and direct simple shear tests.

When all the data is collected, normally is the geogrid manufacturer who will design the cross section of the road, deciding the type of grid (there are several dimensions possible – they must match with the aggregate size), the number of layers and the height of the compacted stones.

The designer will use semi empirical rules, using as inputs shear strength of the peat, weight of the road and expected number of equivalent axes.

It is standard practice to use at least 2 layers of geogrid: a lower one directly on the existing material, and an upper layer on the top of the embankment, used as a support for the controlled granulometry crushed gravel. 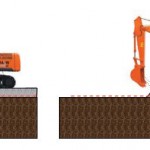 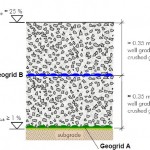 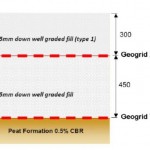 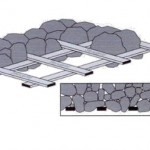 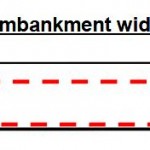